Helping People With Dementia Exercise Their Right to Vote 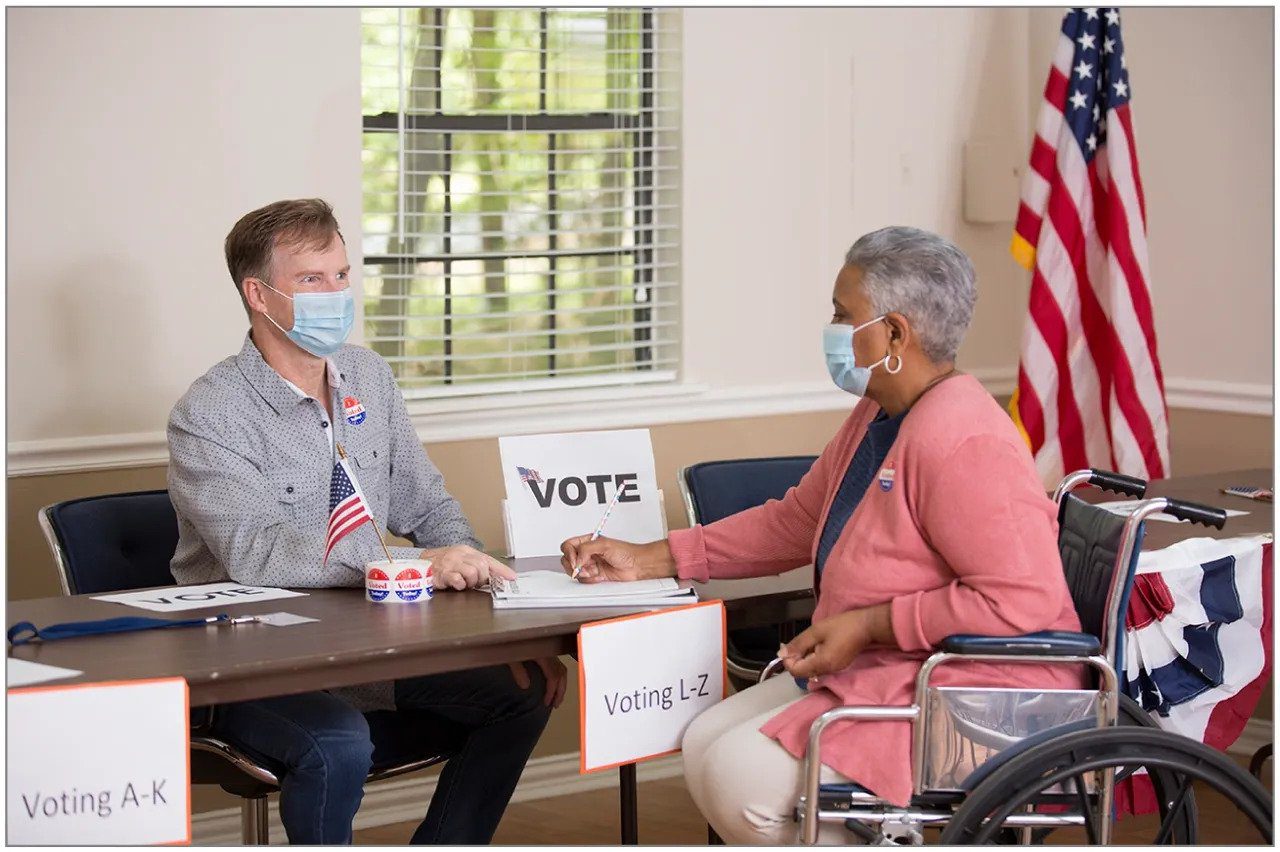 The novel coronavirus pandemic and a US Postal Service slowdown may not be the only hurdles facing people with dementia who want to vote in the 2020 general election.

Nearly 6 million people in the US have some form of the condition, the US Centers for Disease Control and Prevention estimates, and they represent almost 2.5% of the 253.8 million US residents who are of voting age.

The oldest voters, those aged 60 years or older, are more likely to vote than younger age groups, according to the United States Elections Project; the lion’s share of people with dementia fall into that demographic. While the pandemic is expected to present unprecedented logistical obstacles, especially for those living in nursing homes, having dementia doesn’t revoke a person’s fundamental right to cast a ballot.

“Alzheimer’s disease is progressive, and it evolves over many years. A person in the early stages, and even into the more moderate stages, still has the capacity to vote,” Beth Kallmyer, MSW, vice president of care and support for the Alzheimer Association, said in an interview.

Someone with advanced dementia might not be able to comprehend the act of voting, she noted, “but the reality is they can understand for a really long time, particularly people who have voted their whole lives. This is something they’ve done, something they can put context around. They might need a little bit of assistance, but there are voting laws to support that.”

Some observers have raised concerns that votes cast by people with dementia might actually represent the views of those assisting them, although there’s little evidence of voter fraud in nursing homes, said Nina Kohn, JD, an elder law specialist at the Syracuse University College of Law who studies the civil rights of individuals with diminished cognitive capacity.

One point of debate over the years has been how to determine whether someone with dementia can no longer express a voting preference and who should make that decision.

Back in 2004, the authors of a JAMA  article discussed the need to develop an instrument that poll workers, judges, professional caregivers, and family members could use to assess the capacity of someone with dementia to vote.

The discussion was spurred by a 2001 ruling in Doe vs Rowe, a case that challenged the Maine Constitution for prohibiting individuals “under guardianship for reasons of mental illness” from registering to vote or voting in any election. Among the plaintiffs’ arguments was that the voting prohibition violated the Americans with Disabilities Act. Although the federal district court ruled that prohibiting someone from voting solely because they were under guardianship was unconstitutional, the court did say that only people who could understand the nature and effect of voting and could choose among candidates and questions on the ballot could legally vote.

But Jason Karlawish, MD, the lead author of the 2004 JAMA article, says his thinking, like that of many others, has evolved since then. They’ve abandoned the notion that a standardized test was needed to evaluate the capacity of individuals with dementia to vote. Simply put, Karlawish said, “If they want to vote, they should be allowed to vote.”

Functional capacity should be the only determining factor, Karlawish, codirector of the Penn Memory Center at the University of Pennsylvania, said in an interview. If people with dementia need help reading or marking a ballot, they should get it. Only those unable to communicate their ballot choices after receiving that assistance can no longer vote, he said.

However, even though the notion of a standardized assessment of voting capacity has been abandoned, ”We still have some [nursing home] staff—and I don’t think they’re badly intentioned—[who think] a part of their role is to figure out who should be voting” by administering cognitive tests, Kohn said. She added, however, that “short of a court determination that an individual lacks the capacity to vote, an individual has the right to vote.”

Voting During a Pandemic

Although people with dementia have the right to vote, they might find it particularly hard to do in the 2020 general election.

“This year we’re going to see more older people having difficulty exercising their right to vote, and that includes people with dementia,” Kohn said.

Even in a typical year, people with dementia living in the community may need help remembering the election date, getting to a polling place, or completing a ballot, Kohn said. This year, “there’s enhanced confusion about how to vote,” she noted. Perhaps the most disruptive forces, Kohn added, are “misinformation campaigns” about voting, especially mail-in voting, in which “people [are] being told they can’t trust one system or another.”

A number of states have procedures in place for election officials to assist nursing home residents with voting, Kohn said. Although many nursing homes still greatly limit visitors because of the pandemic, the Centers for Medicare & Medicaid Services on September 17 issued a new guidance to facilitate safe visitation in nursing homes. But at least 1 state, Wisconsin, has decided not to send “special voting deputies” to assist nursing home and care facilities’ residents with casting their ballot in the 2020 general election.

“The question is what goes on in its place,” Kohn said. “Nursing homes that take federal money have a duty to support residents’ rights and their exercise of the rights as citizens of the United States.”

In lieu of the special voting deputies, the Wisconsin Elections Commission has recommended that nursing home residents vote by mail, with the help of administrators and staff if necessary.

“To what extent will nursing homes carry through on that duty?” Kohn asked, noting that such facilities face increased staffing pressures, and failure to help residents vote isn’t likely to ever be discovered. Even if it is, she said, penalties are often nonexistent.

It would be helpful if physicians who care for nursing home residents with dementia asked them if they wanted to vote and documented their answer in the medical record, Kohn said. “We know that physicians’ notes are a really key way of communicating with staff.”

Of course, not every patient with dementia will say they want to vote, even if they’re still capable of doing so, noted Minneapolis-based Jayne Clairmont, who has spent her career running memory care homes and consulting on dementia issues. Some are “just trying to cope with life,” said Clairmont, who works with the Dementia Action Alliance, an advocacy group.

For nursing home residents who do want to vote, family members should take the initiative to make sure they can, Kallmyer said.

“I would suggest they call the nurse that they work with, or the administrator, [and tell them] ‘my father lives there, and he’s always voted, and he wants to vote this year,’” she said. “In the end, it’s about giving people who have a right to vote access to be able to vote.”